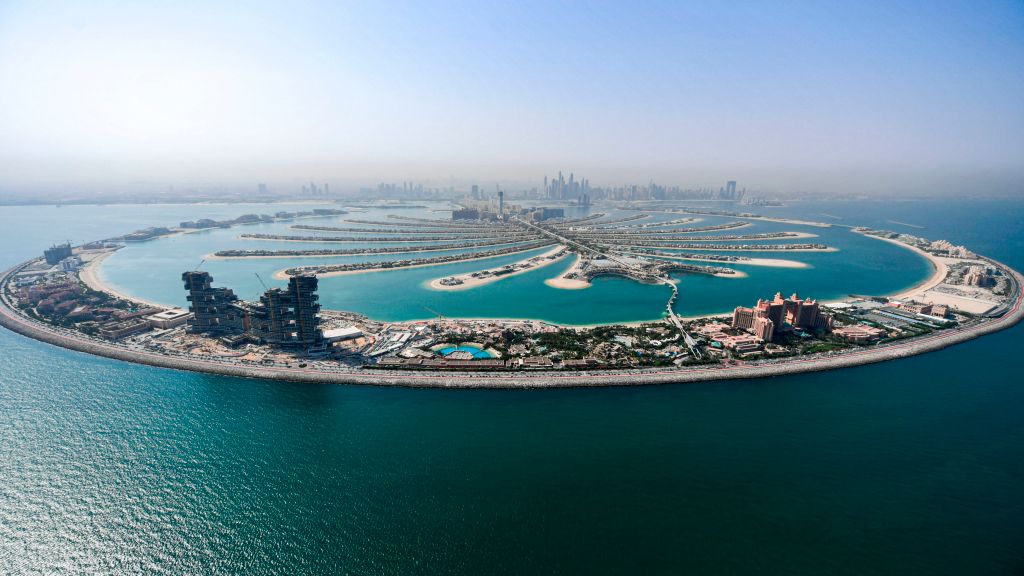 The United Arab Emirates is a collection of seven monarchies carved out of a point of land bordering Saudi Arabia, Oman and Qatar. These seven monarchies are Abu Dhabi, Ajman, Fukairah, Ras Al Khaimah, Sharjah, Umm Al Quwain and… Dubai.

Dubai is certainly the best known of the seven monarchies by Westerners. When Westerners think of Dubai, they probably imagine a sandy metropolis dripping with oil wealth. And that’s right! Over the past decades, Dubai has invested hundreds of billions of dollars in projects they hope will diversify their tiny emirate away from oil and natural gas into a hub of tourism and luxury living. Dubai has built dozens of five-star hotels and the tallest hotel in the world, the Burj Khalifa. The Burj Khalifa is about twice as tall as the Eiffel Tower and the Empire State Building.

This is the Palm Jumeirah:

The Palm Jumeirah has thousands of residences, around 30 luxury hotels, a monorail system and seven shopping malls. In terms of hotels, Jumeirah has a Fairmont, a St. Regis, a Waldorf Astoria and, most famously, an Atlantis.

If you could afford it, I would highly recommend purchasing one of the luxurious villas in the Jumeirah gated community. But you better act fast! The island’s real estate is on fire right now, with hundreds of millions of dollars coming in from foreign investors.

And according to a recent Bloomberg report, one of those foreign investors is Indian billionaire Mukesh Ambani.

Mukesh reportedly just paid $80 million for a beachfront estate on the island, and in doing so, he set a residential real estate record for all of Dubai.

I spent an hour trying to find the exact villa Mukesh just bought but couldn’t identify it with 100% certainty. I found what I think is a very good comparable to give you an idea. The house in the following video is 11 bedrooms and 46,000 square feet. The property Mukesh just bought is said to be 30,000 square feet with 10 bedrooms. The house in the video has been listed for sale for $60 million. So somehow Mukesh paid $20 million more for a 16,000 square foot property that’s smaller than what you’re about to see. Mukesh’s house must be extremely luxurious.

Ambani is said to have bought the house for his youngest son Anant Ambani. This is according to two sources familiar with the secret deal, which has not been publicly confirmed by either Ambani or his company.

The $80 million purchase price is far from the only expense Ambani incurs to acquire the property. There are millions left to customize the domain and improve its security features.

Ambani’s main residence will of course remain in Mumbai, in the 27-storey skyscraper known as Antilia. But the man-made islands of the Palm Jumeirah are a paradise tailor-made for wealthy families like the Ambanis, with not only luxury homes but also various hotels, spas, restaurants and nightclubs. Some 80% of current residents of the United Arab Emirates come from other countries, with India being particularly well represented.