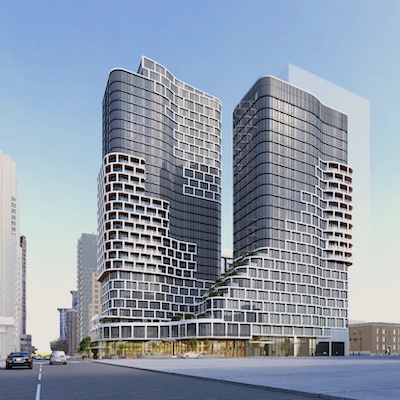 The team behind a high-end mixed-use development in downtown Ottawa remains optimistic after navigating two years of challenges and disruption.

Site appeal and high-end amenities aside, the challenge facing any developer right now is recovering from the pandemic. The massive shift to remote learning by tens of thousands of post-secondary students, as well as large employers like the federal government embracing working from home, continues to impact the entire rental market .

“The whole rental market is kind of tied together and there’s been a shock . . . a ripple effect,” Main + Main vice president Daniel Byrne told RENX. “There will be a longer back to normal But at the end of the day, we are very optimistic for downtown Ottawa.

That’s not to say the pandemic won’t have a lasting impact on how tenants of all kinds view multi-residential tenancies, for en-suite amenities, as well as available public-use space in buildings.

“The most striking and enduring shift in consumer preferences as a result of the pandemic is really about work-from-home and hybrid models,” Byrne said. “So we’re responding to that.”

This includes an amenities program, with flexible on-site space that can operate as co-working spaces and common areas, with features such as proper internet and power connectivity, coffee stations and drop-in center services. ‘business.

Meeting the changing needs of tenants is only part of the challenge. There have of course been profound impacts on any developer’s supply chain in addition to the cost and availability of skilled labor. All of this has made it difficult to keep any large-scale project on track.

Byrne said the relationships Main + Main has built with suppliers and trades, the design and engineering community, local government and community associations over its 11 years in the local market have been critical.

“You have to continually re-evaluate the decisions you make on the project,” Byrne said. “We believe that very active management of the construction process is key to mitigating the worst effects of all the inflation and supply chain issues we have encountered.”

Main + Main describes the 400 Albert – which was designed by IBI Group – as “curved, organic and elegant”.

A 23-story tower and a 29-story tower will sit on a two-story podium that “emphasizes generous retail on the ground floor and a connection to the street on all sides. The sculpted design is in keeping with the sophisticated approach taken inside and out to bring refined living to the downtown west.

The first occupation of the site is scheduled for the end of 2025.

The project was approved by Ottawa City Council and the city’s planning committee two years ago, after several years of design and ownership changes. Main + Main bought the site in 2018 and then sold the plot where a third tower is planned to Rimap Development, which is building this tower separately.

Main + Main was founded by veteran Ottawa real estate developer Rick Iafelice in 2011, with a focus on mixed-use and purpose-built rentals. The company now has offices in Toronto, Montreal and Winnipeg as well as Ottawa.

In addition to 400 Albert, Main + Main has several other projects underway in Ottawa, including a 1,000-unit project along the Rideau River on the outskirts of downtown Vanier, which will open later this year. .

It will be developed in partnership with Burlington-based Equiton and its Residential Income Fund, which acquired a 75% stake in the development in January.

The companies estimate that this project will be valued at nearly $500 million when completed.